A Wicked Plan for World Domination

When the righteous are in authority, the people rejoice: but when the wicked rule, the people mourn. - Proverbs 29:2 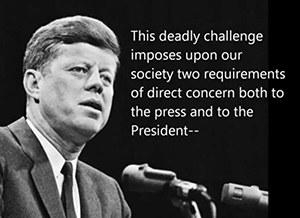 President Kennedy warned Americans against secret societies and a global, monolithic, ruthless group who conspire to increase their influence throughout the world.

< < < Click to listen to three minutes of President Kennedy's speech.

“The people behind the efforts to enforce globalism are tied together by a particular ideology, perhaps even a cult-like religion, in which they envision a world order as described in Plato’s Republic. They believe that they are “chosen” either by fate, destiny or genetics to rule as philosopher kings over the rest of us. They believe that they are the wisest and most capable that humanity has to offer, and that through evolutionary means, they can create chaos and order out of thin air and mold society at will.” - Preston James PhD

The Bible does not use the phrases “one-world government” or “one-world currency” in referring to the end times. It does provide evidence to enable us to draw the conclusion that both will exist under the rule of the Antichrist in the last days.

In the book of Revelation, the Apostle John sees the “beast,” also called the Antichrist, rising out of the sea having seven heads and ten horns (Revelation 13:1). Combining this vision with Daniel’s similar one (Daniel 7:16-24), we can conclude that some sort of world system will be inaugurated by the beast, the most powerful “horn,” who will defeat the other nine and will begin to wage war against Christians. The ten-nation confederacy is also seen in Daniel’s image of the statue in Daniel 2:41-42, where he pictures the final world government consisting of ten entities represented by the ten toes of the statue. Whoever the ten are and however they come to power, Scripture is clear that the beast will either destroy them or reduce their power to nothing more than figureheads. In the end, they will do his bidding.

John describes the ruler of this vast empire as having power and great authority, given to him by Satan (Revelation 13:2), being followed by and receiving worship from “all the world” (13:3-4), and having authority over “every tribe, people, language and nation" (13:7). 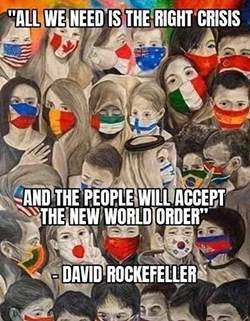 From this description, it is logical to assume that this person is the leader of a one-world government which is recognized as sovereign over all other governments. It is hard to imagine how such diverse systems of government as are in power today would willingly subjugate themselves to a single ruler, and there are many theories on the subject. A logical conclusion is that the disasters and plagues described in Revelation as the seal and trumpet judgments (Chapters 6-11) will be so devastating and create such a monumental global crisis that people will embrace anything and anyone who promises to give them relief.

Once entrenched in power, the beast (Antichrist) and the power behind him (Satan) will move to establish absolute control over all peoples of the earth to accomplish their true end, the worship Satan has been seeking ever since being thrown out of heaven (Isaiah 14:12-14). One way they will accomplish this is by controlling all commerce, and this is where the idea of a one-world currency comes in. Revelation 13:16-17 describes some sort of satanic mark which will be required to buy and sell. This means anyone who refuses the mark will be unable to buy food, clothing, or other necessities of life. No doubt the majority of people in the world will succumb to the mark simply to survive. Again, verse 16 makes it clear that this will be a universal system of control where everyone, rich and poor, great and small, will bear the mark on their hand or forehead. There is a great deal of speculation as to how exactly this mark will be affixed, but the technologies that are available right now could accomplish it very easily. Microchipping 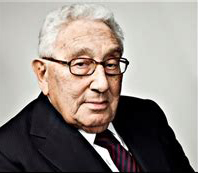 "Today Americans would be outraged if U.N. troops entered Los Angeles to restore order; tomorrow they will be grateful!" This is especially true if they were told there was an outside threat from beyond, whether real or promulgated, that threatened our very existence. It is then that all peoples of the world will pledge with world leaders to deliver them from this evil.

The one thing every man fears is the unknown. When presented with this scenario, individual rights will be willingly relinquished for the guarantee of their well-being granted to them by their world government." - Henry Kissinger address to the Bilderberg meeting at Evian, France, May 21, 1992.

Do not be deceived! The thief comes only to steal and kill and destroy. Jesus came that mankind may have life and have it more abundantly. Jesus is the good shepherd who laid his life down for the sheep. The leaders of the New World Order plan to depopulate the sheep. They have and will continue to propagate wars, pandemics, famines, and other natural disasters to deceive the masses into surrendering their freedoms and submitting to a New World Order.

Those who are left behind after the Rapture of the Church will be faced with an excruciating choice—accept the mark of the beast to survive or face starvation and horrific persecution by the Antichrist and his followers. But those who come to Christ during this time, those whose names are written in the Lamb’s book of life (Revelation 13:8), will choose to endure, even to martyrdom.

Ex IRS Agent, Sherry Peel Jackson Tells It Like It Is

The love of money (the control it affords) is a root of all kinds of evil. Pastor Rodney Howard-Browne and Paul L. Williams detail the money trail in their books: "The Killing of Uncle Sam" and "Killing the Planet."

Do not be ignorant of the enemy's devices. Learn who the ruling elite are, what they have done, are doing, and will do. Available as book, eBook and audiobook.

Pride, greed, and power have driven men to do the unthinkable including selling out their nations and unsuspected citizens to the most corrupt and destructive "invisible" global leaders on Earth. But how did this happen on American soil? How did the downfall begin and who were the predators that the "land of the free and home of the brave" fell victim to? And is all hope lost? This book captures the details of the last 200 years of American history that the mainstream media do not want you to know.

We must WAKE UP! before the enemy has completed his plan and has complete control over the world. Submit yourself to God. Preach the gospel, and make disciples of everyone that you can. 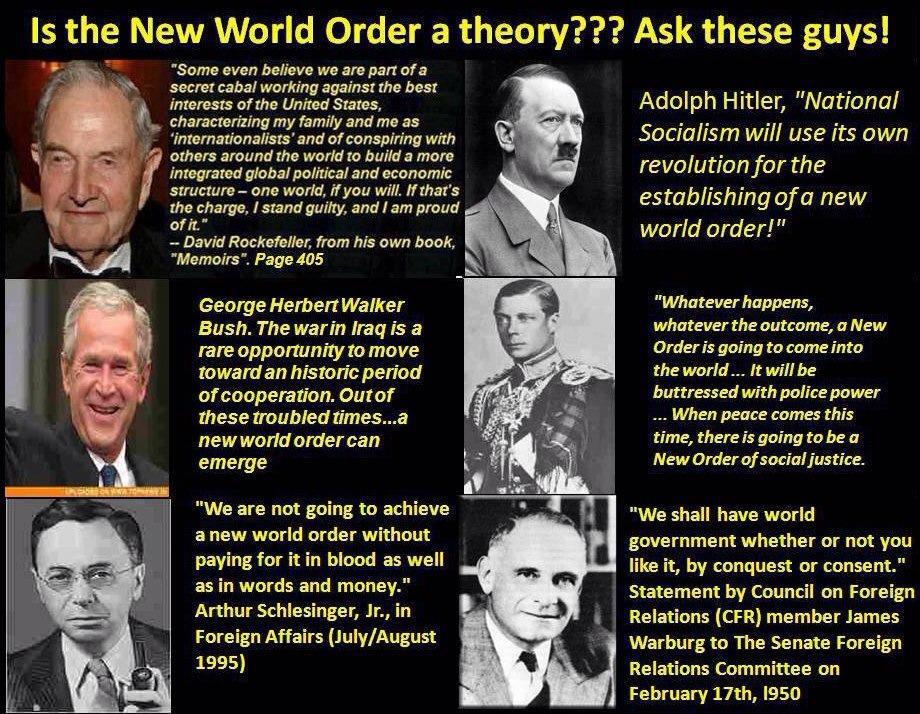 George Orwell's Warning to the World

Do We Live in a Brave New World?

Aldous Huxley's Warning to the World

Signs and Symbols of the New World Order in Your Wallet

The U.S. dollar bill bears the signature of the Illuminati cabal. Have you wondered what all those signs and symbols refer to? The bills may say “In God We Trust”, but it is not referring to the God of the Bible.

1. Novus Ordo Seclorum: A Latin phrase which means ‘a new order of the ages’ is born. Literally, it is calling for a NEW WORLD ORDER.

2. Annuit Coeptis: A Latin phrase which means ‘He has favored our undertakings’. The question remains... Who is '"he"?

3. The Egyptian Pyramid: One of the great Illuminati symbols, the triangle, representing the ancient wisdom of Egypt.

5. 13 Levels: The pyramid has 13 steps or levels leading up to the incomplete Capstone. In the Bible, 13 is the number for rebellion i.e. Revelation 13. America was created when our founding fathers rebelled against King George. In the official magazine of Freemasonry, The New Age, there is a detailed explanation and admission from the Masons that the symbols on the U.S. dollar are indeed Masonic.

7. 13 Stars: Again, the Biblical number for rebellion 13- forms the basis of the Great Seal. The number 13 is all over the U.S. dollar.

8. E Pluribus Unum: Latin phrase meaning ‘From Many, One’ or a One World Government. The phrase has 13 letters. Amazing coincidence.

9. Spider’s Web: When you look closely at the background pattern of the U.S. dollar, you will clearly see that it is a spider’s web- represented death, treachery and conquest. Also a Bohemian priest with a tiny human Skull embedded in the web!

10. Olive Leaves: The Eagle is holding 13 olives leaves and 13 arrows. The olive leaf is a sign of peace, but the eagle’s claws are closed to represent that these things are being taken away, and not being offered. The arrows are a symbol of war.

The Illuminati has already started building the New World Order. It has created its first capital city headquarters in Astana, Kazakhstan. 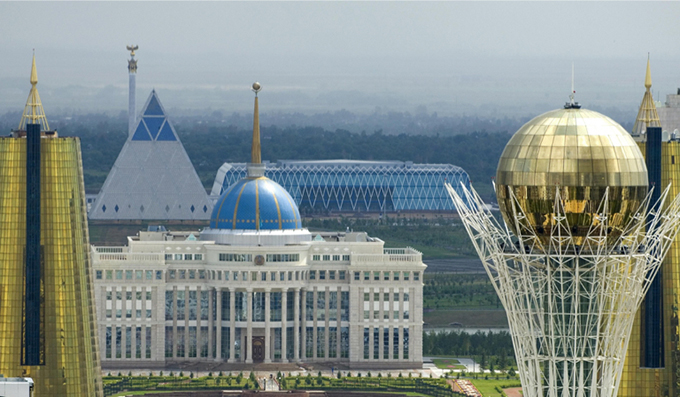 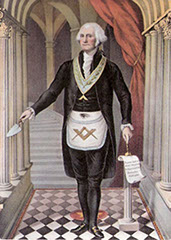 Washington D.C. and It's Satanic Symbolism

You shall not add to the word which I am commanding you, nor take away from it, that you may keep the commandments of the Lord your God which I command you. - Deuteronomy 4:2 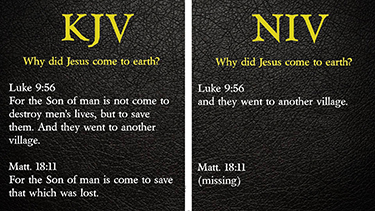 Is your modern Bible translation preparing you to accept the New World Order?

Jesus asked, "Do you know how to discern the appearance of the sky, but cannot discern the signs of the times?" - Matthew 16:3 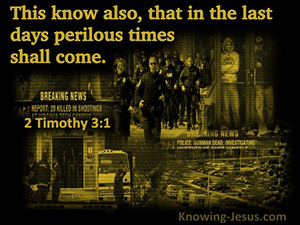 The Church must not be ignorant of the enemy's devices, but instead discern the signs of the times, because the New World Order is rising, and perilous times are coming.

The rest of verse 6 helps explain: “Because you have rejected knowledge, I reject you from being a priest to me. And since you have forgotten the law of your God, I also will forget your children” (KJV). It’s important to note the structure of the verse: “rejected knowledge” is parallel to “forgotten the law.” This fits the context of the opening verse of the chapter, which states that Israel failed to acknowledge the LORD as their God (Hosea 4:1). The people did not simply lack knowledge; they actively rejected it.

Another parallel offers a deeper understanding of the passage. Because Israel had “rejected” knowledge (God’s Law), God would “reject” them. Because Israel had “forgotten” God’s Law, He would “forget” their children (He would remove His future blessing from the nation). As a result of God “rejecting” and “forgetting” Israel, they would be destroyed. Hosea’s message is in line with Moses’ warning to the nation that God would remove His blessing from a disobedient people (Deuteronomy 28).

Hosea 4:1-2 emphasize that Israel’s lack of knowledge was not mere ignorance, but active sin against God: “There is no faithfulness or steadfast love, and no knowledge of God in the land; there is swearing, lying, murder, stealing, and committing adultery; they break all bounds, and bloodshed follows bloodshed.” The people were only ignorant of the Law because they actively ignored it.

Hosea’s warnings went unheeded, and Israel was conquered by Assyria during his ministry. Yet, even in judgment, God spares a remnant and restores His relationship with them. The prophecies of Hosea reflect this pattern. Israel was judged, yet the Lord would later restore His people whom He loved.

The coming of Jesus Christ illustrates God’s love to the fullest degree. Jesus died for the sins of all people, offering every person the opportunity to come to faith in Him (John 3:16; Ephesians 2:8-9). To those who do believe, Jesus is “wisdom from God” (1 Corinthians 1:30). Because of Christ, there is no need for anyone ever again to be “destroyed from a lack of knowledge.”

The Religion of Totalitarianism | MUST WATCH

When you see something evil, you see the reality of it. There is no going back or denying it. William Wilberforce said, "You may choose to look the other way, but you can never say again that you did not know."

Joy of Faith enlightens, equips and encourages you to make a positive change.

Make a Positive Change With Us

Corner of Military Trail and Shenandoah.