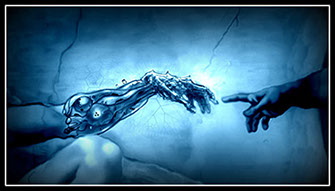 Transhumanism is the goal. Its progenitors were highly educated and wealthy individuals of primarily British and European descent. They were the power elite of society, and their views were absolutely elitist, if not outright totalitarian and fascist in nature. Their successors are rewiring and reprogramming the masses to surrender their humanity with the promise of "becoming as God."  This is the same enticement the serpent offered to Eve in the Garden of Eden in Genesis 3:5.

The founders of transhumanism have elitist views about what humanity should be. This human beehive concept has been envisioned by the power elite throughout history as the ideal society. The ultimate slave race, scientifically designed to conform, obey, and serve the needs of the elite – worker bees who do not question or rebel.

Transhumanists envision this hive mind as being possible when all people across the world can link their minds together using technology, creating a symbiotic existence through the new superintelligence of this collective hive mind. They refer to this collective, superintelligence as the Singularity. This is best illustrated through the Star Trek Borg collective where many individual minds are interconnected.

Romans 1:19-25 reads 19 Because that which is known about God is evident within men; for God made it evident to them. 20 For since the creation of the world His invisible attributes, His eternal power and divine nature, have been clearly seen, being understood through what has been made, so that they are without excuse. 21 For even though they knew God, they did not honor Him as God or give thanks, but they became futile in their speculations, and their foolish heart was darkened. 22 Professing to be wise, they became fools, 23 and exchanged the glory of the incorruptible God for an image in the form of corruptible man and of birds and four-footed animals and crawling creatures. 24 Therefore God gave them over in the lusts of their hearts to impurity, so that their bodies would be dishonored among them. 25 For they exchanged the truth of God for a lie, and worshiped and served the creature rather than the Creator...

Why 'Upgrading' Humanity Is a Transhumanist Myth

Social media and other brain altering technologies are intended to prepare humanity to be replaced by A.I. and "become as God." Protect your soul (mind, will and emotions) from the inherent threats of social media; privacy invasion, brain rewiring, and future integration with the Internet. Say NO to the serpent's offer to "be as God," because it is an offer to rebel against God, as Lucifer did in wanting to exalt his throne above the throne of God in heaven. It is an offer to rebel against God as Nimrod, Baal, the sun god, did in wanting to build a tower to reach heaven. Resist the Internet of Things (IoT). Do not give up your soul (humanity) because of a devilish lie!

We should seriously consider avoiding social media and online activity before humanity is trapped on the InterNET in the World Wide WEB.

Understand why the power elite are luring the masses onto the InterNET and into the World Wide WEB through social media.

technology - the sum of techniques, skills, methods, and processes used in the accomplishment of objectives.

technocracy - an ideological system of governance in which decision-makers are selected based on their expertise in a given area of responsibility, particularly with regard to scientific or technical knowledge. Click here if you want to learn more about technocracy.

technocrat - an adherent of technocracy; a technical expert, especially one in a managerial or administrative position. Click here if you want to know the major technocrats and what they are planning. 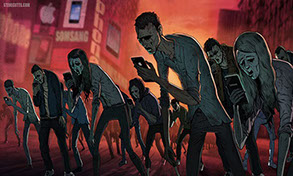 The Intended Result of Social Media

People are increasingly choosing to be connected online through social media instead of having face-to-face conversations. They are being assimilated to the hive mind. They feel compelled to reconnect when they have only moments at a traffic signal while driving or when walking and waiting for the signal to change. They reconnect dozens, some hundreds, of times a day, even when on a date while waiting for their food to arrive. They experience separation (disconnection) anxiety if they leave their device at home or lose it or are unable to reconnect at the summons of the tone or beep. This mental, emotional, and physical need to be connected is by design. People are assimilating to the hive mind through social media.

“There is a difference between progress and technology, progress benefits mankind. Technology does not necessarily do this.”

Read Pastor Rodney Howard-Browne and Paul L. Williams' books "The Killing of Uncle Sam" and "Killing The Planet" to learn who the ruling elite are, what they have done, are doing, and will do. Available as book, eBook and audiobook.

Pride, greed, and power have driven men to do the unthinkable including selling out their nations and unsuspected citizens to the most corrupt and destructive "invisible" global leaders on Earth. But how did this happen on American soil? How did the downfall begin and who were the predators that the "land of the free and home of the brave" fell victim to? And is all hope lost? This book captures the details of the last 200 years of American history that the mainstream media do not want you to know.

Is social media really harmless? No. Social media is harmful, so guard your soul, and protect your humanity. Just say NO to those who are promising that you will "be as God."

Don't fall for their hype!

They are a cadre of fools professing themselves to be wise, hellbent on destroying humanity with their Satanic, scientistic delusion of becoming God.

Is social media really harmless? Click below to continue learning.

Joy of Faith enlightens, equips and encourages you to make a positive change.

Make a Positive Change With Us

Corner of Military Trail and Shenandoah.